Biographical information
Walter was born in Upper Mittagong, while his father was the teacher at the local school there. He received his schooling from his father as the family moved around the state, being transferred from one public school to another. Walter then went to Fort Street High School in Sydney for a year (I wonder if he lived with his grandmother Sarah Horsey?), graduating top of his class, before beginning a four-year training period as a pupil-teacher at Crown Street Public School, Sydney when he was 14 years old.

Upon finishing his pupil-teacher training, he did some further teacher training before being sent to supervise the half-time schools at Anna Bay and Nelson's Bay (teaching the morning in one school and the afternoon in the other). After a year of building the schools up, the NSW Education Department raised the status of both those schools to full-time, and Walter was appointed the teacher at the bigger school at Anna Bay.

During his time at Anna Bay a local girl, Amy Blanch - a member of one of the large pioneer families of the area - caught his eye. They married in 1890, but when Walter finally got around to informing the Department of Education of his marriage two years later, the Department was alarmed to realise that due to intermarrying amongst the pioneer families of the area, the school teacher was now effectively related to almost all his pupils. They deemed this unsuitable for school discipline, and Walter was transferred to Glendon Brook Public School at the end of 1893, against his wishes.

Despite not actually wanting the transfer to Glendon Brook, it is evident that Walter threw himself and his family energetically into life there. He was a major driver behind the establishment of the local lawn tennis club, and he and his children played tennis there enthusiastically. Weiss was active in the Singleton District Teachers' Association, and played tennis and cricket for them on more than one occasion. At the school he established a garden, with a large portion of the school grounds under cultivation to cereals, fruits and flowers, winning awards at the Singleton Flower Show for their produce more than once. Weiss was also involved in the Singleton and District Progress Association.

Walter Weiss was a very popular teacher, and it would seem that he was always willing to give a troubled child a second chance. In 1896, a boy was bought before the local court for wandering with no lawful occupation. Weiss testified on his behalf that he was a smart boy in school and offered to find him accommodation - the boy was handed over to Walter, who no doubt made good on his undertaking to look after the boy's welfare. Years later when living at Erina, he went surety for a young man who was caught stealing from his orchard, wanting to give him a chance to make good.

It was during their time at Glendon Brook that the Weiss family began attending the local Methodist church and became active members. They also were involved in teaching in the Glendon Brook Sunday School.

In 1914 Walter Weiss received a transfer to Erina Public School. The local Glendon Brook community were very sad to see him and his family go, being very appreciative of his involvement in the community over the previous twenty years. He was presented with a purse of sovereigns as a mark of the esteem in which he was held.

Upon his transfer to Erina Public School Weiss conducted himself within the community with his usual energetic enthusiasm, joining community organisations and even establishing a Social Evenings Club in Erina to improve community connections and provide amusement and activities for locals. He also was involved in various local fruit growers associations.

It was while the family was living in Erina that World War 1 started, and two of the Weiss' sons enlisted - Fred and Erle. Sadly, both were killed in action, Fred in 1916 and Erle in 1918. Following the end of the war, Walter was a founding member of the Erina and District Branch of the Sailors and Soldiers' Fathers' Association of NSW, and was elected President of the branch. He was also involved in the building of the Erina War Memorial for those locals who served or made the ultimate sacrifice in the war.

Further sorrow was visited upon the Weiss family on the sudden death of Walter's dear wife Amy in 1925, aged 52. She had been suffering from unspecified pain for some time, and had an operation at a private hospital in Waverley, Sydney. She came through the operation, but died unexpectedly a few days later. A tribute to Amy in the Gosford Times and Wyong District Advocate (16 July 1925, p 8) noted, "Mrs Weiss was beloved and respected, as head of her household and as neighbour and friend." A memorial notice in The Methodist (22 August 1925, p 11) described her as "one of those Christian women whose light shone most brightly in the home circle, rather than in the wider activities of Church life, but one and all, whoever entered that home, bear unstinted testimony to the sweet and gracious influence exercised in all the family relationships." The sadness of Amy's sudden death was added to by the fact that she and her husband were looking forward to his imminent retirement in a few years time.

Walter Weiss was to retire from teaching in 1929, but first took long service leave. He went on a world tour during his long service leave, visiting England, Europe, Asia and Africa. At his farewell at Erina Public School Mr H.O. Jackson "expressed the hope that Mr Weiss would greatly enjoy his world tour and return in good order and condition to revisit his many friends and come back well charged with even greater measure of 'Weissdom'" (The Gosford Times and Wyong District Advocate, 14 March 1929, p 14.) At a farewell held at Gosford Methodist Church Weiss was surprised to be presented with a certificate from the Commonwealth of Australia, signed by the then Prime Minister of Australia, Mr S.M. Bruce, serving to introduce him and obtain the willing help of any official in the British Empire - it was a very high recommendation for a private citizen to carry (The Gosford Times and Wyong District Advocate, 21 March 1929, p 3.)

During his world trip apparently Walter didn't want to visit his "wealthy relations" (presumably the Holst part of the family) so a family story says he only visited his cousin, the daughter of his uncle Egmont (even though there is no actual known concrete evidence of the existence of this cousin).

Weiss didn't actually retire after his world tour though; as was noted in a Supplement to the Government Gazette of the State of New South Wales (11 Jan 1929), his retirement was cancelled. Instead, on 5 March 1930 The Sydney Morning Herald (p 19) announced that he would be transferred from Erina to Yerranderie as the relieving teacher there. In December of that year there was a bit of excitement at the Silver Mines Hotel, Yerranderie, where Weiss was boarding - it burned to the ground, but Walter was woken by the proprietor in order to escape in time. Once again, while at Yerranderie he joined the local tennis club, and worked in the local Sunday School. Walter Weiss' retirement was finally announced in 1934, after 50 years of teaching.

Weiss didn't really stop working though - his work just was unpaid after his retirement. He lived for a year in Singleton, probably with one of his daughters - Grace or Lorna, and then took over the Methodist ministry in the Picton district as a lay minister. He was already known in the area from his time teaching at Yerranderie, and he fulfilled his work in the Picton district with his usual gusto. He oversaw the building of a new Methodist church at Tahmoor during his time in the district, and within a year the new building was totally paid off. From 1936 to 1939 Weiss worked as the Methodist lay minister on Norfolk Island, and during his time there oversaw the installation of electric lights in the church building.

At the end of his time on Norfolk Island, Walter Weiss returned to the Australian mainland and settled once again in Singleton, living at 3 York Street in a small flat attached to his daughter Grace's home. Although I haven't been able to find any records to confirm this, at some stage between his return to Singleton and 1948, he was put in charge of the Wolaroi Boys Preparatory College, Orange. It is possible that this is what his son Harry referred to in his Prisoner of War diary (serialised in the Singleton Argus in 1946-7) in the entry dated Thursday 1st April 1943: "Yesterday at 3:30pm I received a letter from my dear old Dad. How I enjoyed it, but was sorry it was undated. We all read each other's letters and everyone thinks Dad must be a marvel to start teaching again. I am so proud of him." (Singleton Argus, 10 February 1947, p 2). Walter would have been in his 70s at the time.

As alluded to in the previous paragraph, another of Walter Weiss' sons went to fight in the war - Harry Blanch Weiss enlisted for World War 2 in July 1940. He died of beri beri as a POW in Thailand on 30 September 1943. He wrote a diary while he was a POW and this was returned to his family in Australia by a mate who served with him.

Walter kept active into his last years, continuing his lay preaching, and even receiving a new tennis racquet for his 80th birthday. He died in Singleton Hospital on 2 November 1955, aged 86. He was buried with his wife Amy in the Independent section of Rookwood Cemetery, Sydney. 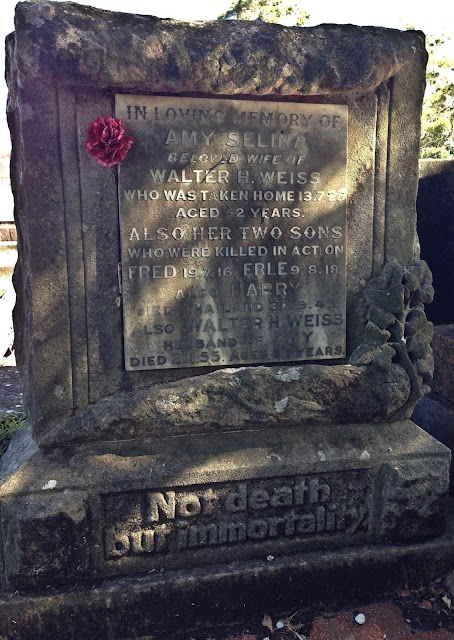