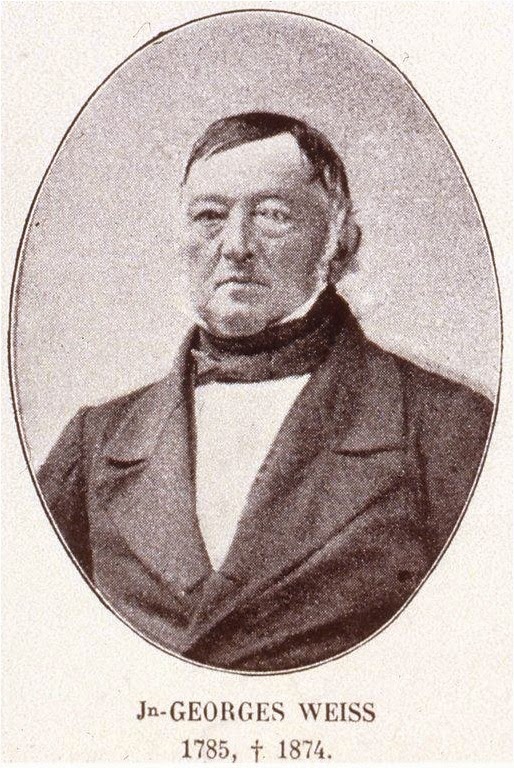 Biographical information
Also known by the German variation of his name: Johann Georg.

Jean Georges Weiss was the seventh child of Gaspard and Marie Weiss, their second born in Mulhouse.

Whether he did start off in fabric printing with his father or not, Jean Georges Weiss ended up as a tanner. His tannery is listed in 1823 in Dollfus-Ausset (1865), under the name of Weiss-Blech - often, because there were so many people with the same name, a man would add his wife's surname to the end of his, either officially or unofficially, so that they could be more easily identified.

He certainly was a man of standing in the community, and was called to serve as a juror in the district of Altkirch in 1841 and 1842 (Haut Rhin Conseil Général, 1841, 1842) and held the position of interim mayor of Mulhouse from 9 March 1843 until 2 August 1843, after the previous mayor André Koechlin resigned. According to his son Jean Georges' 1846 marriage record, he was also deputy mayor at the time.

After his father died, Jean Georges seems to have taken on a patriarchal role within the family, often present at the registering of family births, marriages and deaths.

Jean Georges Weiss died on 26 February 1874 in Mulhouse. His death record, which is very difficult to read, appears to say that the death was registered by his son Jean Gaspard. He is buried in the Protestant cemetery in Mulhouse, next to his wife Barbara.