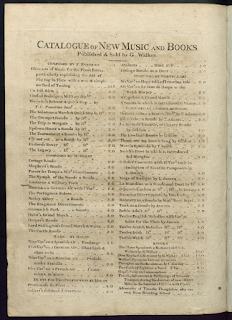 Biographical information
Matthias Holst was sometimes known by the surname "von Holst" later in life. It is said that his son Gustavus, a music teacher, adopted the "von" prefix in order to sound more aristocratic, in the hopes of gaining more prestige and therefore more music students. The rest of the family in London followed his lead.

There is very little concrete information on Holst's life before the family arrived in England. There are plenty of stories, but not a lot to back them up. A talented composer and musician on the piano and harp, he was supposedly a professional musician in the Russian Imperial Court in St Petersburg. He and his family then moved to London, England in the early 1800s. According to Imogen Holst, Matthias Holst's great great granddaughter, he was a competent musician whose political ideas were so unwelcome at the time of the Napoleonic Wars that he fled to England. However, my take on it is that his future wife Catharina was married to someone else (Johann Wilhelm Becker, 1753-1803) when she became pregnant with their first child Gustavus in 1799, so they fled likely retribution and gossip and went to England. Interestingly, Holst had known Catharina and her first husband Johann Becker for a number of years - in 1796 he was chosen as godfather of their youngest son Matthias Alexander, born on February 3. I'm not sure that Johann would have been particularly pleased when a family friend got his wife pregnant and then ran off with her to England.

Why did the family go to England? The music scene in London certainly was alive with foreign musicians, so presumably Holst had hopes that he would get work reasonably easily. He first came to the London public's attention in 1805, when he composed some music for a German theatre production (The Morning Chronicle, 14 Aug 1805, The Times, 15 Aug 1805). Holst did not advertise for students in the London newspapers so either he didn't take students or he didn't need to advertise for them.

Despite being a relatively minor player in the London music scene, the British Library has a substantial collection of Holst's works (though they do have the wrong year for his death), the number of which shows he was quite prolific. The earliest works published in London are apparently from 1805, and many of them he published himself. Holst had his own music warehouse at 126 Great Portland St, from around 1814-1825, and he is listed in Humphries and Smith (1970) as a musician, music and musical instrument seller and publisher at that address. He doesn't seem to have published any new compositions after about 1830. One of Holst's compositions for the piano is performed here.

In 1808 Holst and Catharina were married at St James Piccadilly. One wonders what made them actually seal the deal - was it because they heard her first husband had died, or did they need to prove it officially for some reason?

Holst died at the age of 86 from apoplexy on 11 April 1845, at his daughter's house in Mary St, Hampstead Rd, St Pancras (The Economist, 19 Apr 1845). I believe it must have been his daughter Carolina's house because Benigna was overseas in India, and Constantia lived at 69 Charlotte St at the time.

Holst was buried in the Church of England section of Kensal Green Cemetery, London, on 20 April 1845.

References
Humphries, C & Smith, W.C. (1970). Music publishing in the British Isles, from the beginning until the middle of the nineteenth century. B. Blackwell, Oxford.